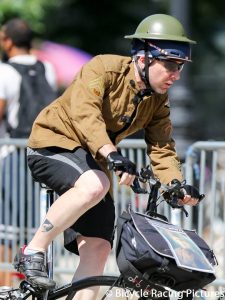 No time to write now so some pics will suffice. Check back later this week … The Philadelphia Fliers Brompton Racing team got 2nd somehow in the team competition in our first outing, and more importantly I met at least 2-3-4 people who want to race for us in the future. Perhaps getting three people to form a team may not be so difficult next time. Next time I will exchange the century old wool uniform for something fast and cool—perhaps a double breasted semi-aero black or orange jacket 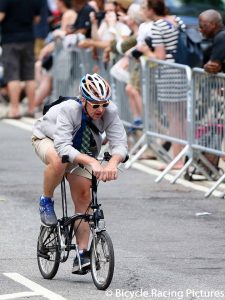 and aero helmet. Nobody races in double breasted anymore, maybe I can start a trend. And no massive front 15 lb. front bag to push against the wind. That was tough. And the silly WWI Brodie M1917* plastic copy helmet I wore over my real helmet would slide back at least once per lap, as seen in a picture below. Not made for racing! 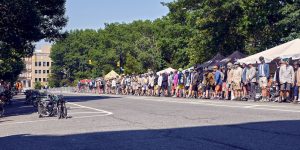 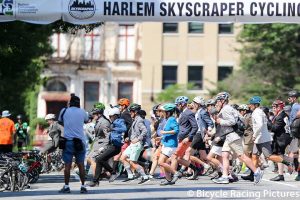 * Reading from Wikipedia, the Brodie helmet is a steel combat helmet designed and patented in London in 1915 by John Leopold Brodie. In modified form it became the Helmet, steel, Mark I in Britain and the M1917 Helmet in the U.S. Colloquially, it was called the shrapnel helmet, Tommy helmet, tin hat, and in the United States the doughboy helmet. Worn by Australians during WW2 and sometimes known as Panic Hat. It was also known as the dishpan hat, tin pan hat, washbasin, battle bowler (when worn by officers), and Kelly helmet. The US version, the M1917, was copied from the British Mk 1 steel helmet of 1916. The German Army called it the Salatschüssel (salad bowl).[1] The term Brodie is often mis-used. It is correctly applied only to the original 1915 Brodie’s Steel Helmet, War Office Pattern,[2]