Helping people ride who otherwise might not be able is a skill I have somewhat accidentally developed over decades. Below right is an example  picture.. A woman who had been a somewhat avid rider came in to the shop I work at seeking advice. She had some fairly significant hand weakness and was finding that the brake lever shifters on her bike were becoming too difficult to use. She needed something with a lighter feel where she could use her whole hand rather than just a single finger or thumb to shift. I thought about all the shifters I’d used over the years and I brought in some older brifters (Dura Ace 8 and 9 speed units) to see if they had a softer feel or required less strength to shift. They were only very slightly better than the budget more modern 9-speed Shimano Sora units on her bike. What to do? 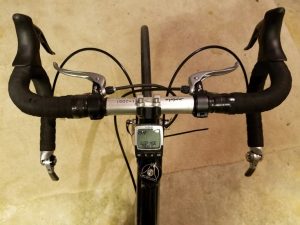 The solution involved some 8- or 9-speed Shimano barend shifters. I brought in one of my bikes that had these units and she was visibly excited when she tried them—this was going to make shifting easier for her. I found a pair on Ebay, she got them and the shifting problem was solved probably as well as it could be.

I also brought in a pair of smaller brake levers—I had allowed her to try the levers on some of the repair bikes we had in, and the smaller levers were better than the big ones my larger strong mechanic hands favor. I had a few of these of these smaller levers lying around because of this, so the braking problem got a lot better.

I also showed her some in-line brake levers and these also were perfect for her situation. I did the repair and it was a troika of success. The shop made some nice labor money and sold a bunch of cables and housing and in-line levers, I cleared out my basement just a wee bit by using a pair of itty-bitty levers I would never use myself, and most importantly a cyclist who was facing a severe curtailing of her riding got to keep pedaling.

On a different note, at the time of this posting I am just starting to ride tandems with VI (visually-impaired) riders on the back. That’s me on the back of this tandem at Masters Nationals in 2016. My friend Greg, who is already an experienced captain of VI tandem racing, is on the front in this picture. We did Masters Nats combined age 100+ but the event was also filled with VI teams. 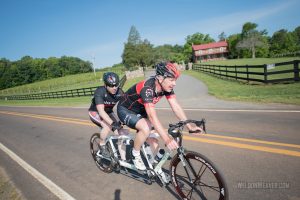